We often see dismantled smog systems on fox Mustangs, some think the power gains are worth the effort and in some cases worth the risk in areas where removing smog can lead to fines. Although I haven’t seen any real before/after dyno results of smog removal on a pretty much stock 302, the general consensus is between a 2 to 5hp gain mostly due to the reduction in restriction from the stock H-pipe (which most likely has worn-out and semi-blocked cats) and some weight savings. Below is a typical vacuum line diagram for most 86+ EFI fox Mustangs.

The EGR system provides “combustion-proof” gases to absorb some of the combustion heat to reduce in-cylinder temperatures. Being combustion inert, these gasses virtually decreases combustion chamber size. EGR systems are meant to reduce Nitrogen Oxide. The exhaust gas is taken from the middle of the heads, through the lower intake to the upper intake and through the EGR valve. The EGR will shut off at WOT, so the performance gain by removing it will be minimal. It will help prevent some pre-detonation (ping) and reduce Hydrocarbon emissions by reducing fuel consumption. The computer will add spark advance to compensate for the recirculated gas.  There isn’t much to the EGR system, it has:

This pump brings air to the back of the heads and into the two rear catalytic converters. When the engine is cold, the thermactor air system pumps fresh air into the heads (there are bumps in each exhaust port in the head, air goes in from the back of the heads from the cross-over tube). When the engine is warmed up, the air is diverted to the cats which helps to create the catalytic reaction that converts hydrocarbons and carbon monoxide into C02 and water vapour. Without this system, the catalytic converters risk clogging up or at least not perform as they should. At WOT, the computer tells the bypass valve to open and dump the fresh air to help limit parasitic drag on the engine. The fox Mustang’s Thermactor Air System comprises of few parts:

There are electric air pumps, one could rig this in their fox hidden somewhere which would help clean up the engine bay and be all smog compliant, in theory.

Without these, a 10 minute drive will leave you smelling like you haven’t washed your junk for a few weeks. These were used on cars since 1975 in America. These things need a temperature of 800 degrees Fahrenheit to work properly which is why they have fresh air tubes, which will help to increase the temps. The 86-93 fox Mustangs has two three-way converters (which means hydrocarbons, carbon monoxide and nitrogen oxides) and another two are two-way converters (hydrocarbons and carbon monoxide).

The EECIV is tuned for the exhaust system having certain scavenging properties, removing your catalytic converters for an off-road X or H-pipe will net you more HP at the top end but at the cost of low-end grunt which isn’t helpful on a street car.

The square black box hanging on the passenger side frame rail has charcoal pellets inside to absorb gas fumes from the fuel system, storing them until the engine can burn it. This is a very simple system. The canister has a line going to the gas tank and another line to the manifold vacuum. Parts are:

No matter how new your 5.0 is, it will have some amount of blow-by which is gases from the combustion leaking into the crankcase, causing pressure build up. This PVC system vents the crankcase and allows the harmful vapors to get burned up. The “positive” ventilation also helps to prolong engine life.

Some people install a filter element at the filler neck, or filtered breather cap. This can create a lean condition because of un-metered air getting into the engine. Capping the oil filler neck to throttle body PCV hose will prevent pressure release from the crankcase which could cause a vacuum in the crankcase and further create a lean condition.

When you have boost on your 5.0, the stock PCV system can bust oil seals and launch your oil dip stick into lower orbit. Most people “fix” this issue by using filter elements again but the same problem will persist when not running under boost with un-metered air. A proper solution to this problem is to run a breather type setup. Or another way of dealing with this is by using a Turbo Coupe PCV valve (Motorcraft EV127) which is designed for boost and a check valve (brake booster valve for example) used on the vacuum line between PCV to the upper intake manifold. Creating vacuum leaks isn’t a normal suggestion but you could tune that out since it would be a minimal leak anyway. Keep in mind that an open filter element in the PCV system can automatically fail a visual emissions inspection. Some have routed the PCV line from the filler neck to the power pipe after the meter, before the charger and using a check valve between the PCV valve and the intake manifold – of course introducing oil vapour into your supercharger may not be the “best” solution, even with an oil trap.

Some people say it’s to cool down the EGR gasses and others say it’s to warm up the throttle body to prevent icing on cold days! Either way these coolant lines are not included in the 1993 SVT Cobra Mustangs! 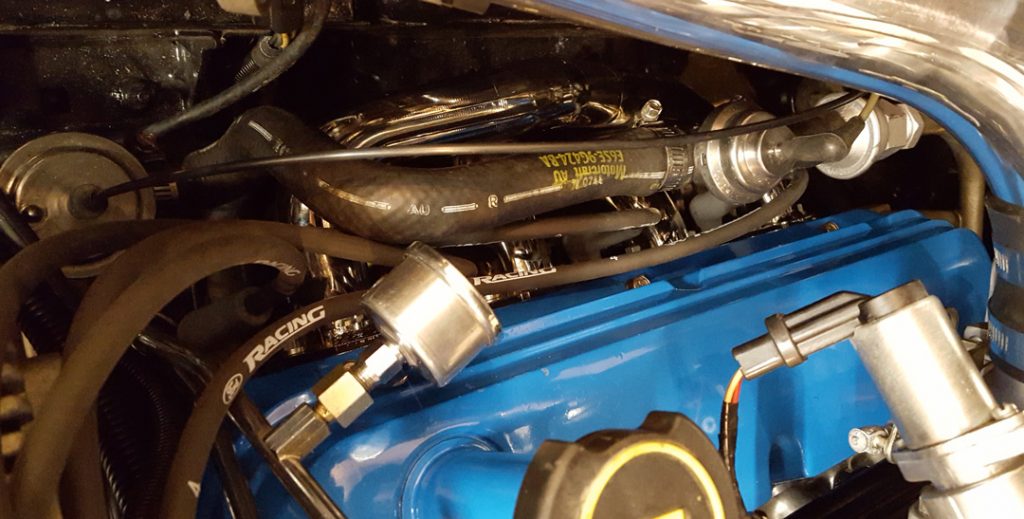 Next article The Complete Fox Mustang EFI Sensors and Things

Installing a Ford Mini-Starter on Your Fox Body Mustang