The EFI system isn’t really that complex on a fox body Mustang, it has a few sensors, solenoids, relays and a computer handling all this input to strive for the best fuel ratio for most performance and mileage in all possible conditions. This article is all about the different sensors on your fox Mustang – I hope this will help you with your tune-ups.

This is a potentiometer for the EEC (computer) to send a reference voltage and monitors the output voltage to determine precise throttle position. To test voltage: The green to black wires should be anywhere from 0.6 to 1.15 is acceptable. The computer will read the TPS voltage and remember, there is no “specific” number to strive for so there’s no need to go crazy trying to reach 0.999v at idle.

The key is to ensure you have enough voltage to let the computer know you’re mashing through the floor boards. That number is idle voltage + 2.71, or to be safe aim for idle voltage + 3v. Put your meter on the green and black wires and test your idle to make sure it’s within an acceptable range (0.6~1.115) and ramp that throttle to wide-open. Make sure the voltage is smooth and not jumpy and that it’s idle+3v at WOT. This will make sure the computer goes to open-loop ignoring the oxygen sensors. Make sure your computer isn’t teetering between WOT and normal operation!

The fox Mustangs received the MAF meters from 89 to 93 (California started in 88). There are two ways to determine how much fuel to dump into the cylinders that Ford used on the fox Mustangs. One way is Speed Density and the other is Mass Air Flow. Simply speaking the MAF method measures the mass of air going into the engine, measuring this helps compensate for air density changes with altitude and even the weather. Speed Density leverages the manifold absolute pressure sensor to read vacuum in the intake manifold.

A bad MAF sensor can cause some idle issues, backfire, not wanting to rev, bad gas mileage or lack of power in some cases. It’s best to check for codes before buying a bunch of sensors. The MAF codes can be 66 or 25. Sometimes you can unplug the MAF sensor when the engine is running, doing this should just about stop the engine from running.

Make sure there are no air leaks from the MAF to the throttle body and also make sure your MAF sensor isn’t all clogged up (albeit a dirty MAF isn’t going to completely stop your fox from running). The fox Mustang will have a 4 wire MAF. Below are some ways to test your MAF

VPOWER and GROUND: Key-off, disconnect the MAF connector. Connect the Volt-Ohm-Milliammeter between VPOWER and GROUND at the car’s harness connector and put the ignition on (engine off). Should give 10.5 volts or more. If not, check the wiring.

MAF circuit short: Key-off, disconnect the MAF connector. Connect the Volt-Ohm-Milliammeter between MAF SIGNAL and MAF RETURN, then the MAF SIGNAL and vehicle ground. We should see a reading of 10,000 ohms or more. If not you could have a problem with your wiring or even the computer.

The EVP sensor tells the computer what the EGR valve is doing. The EGR valve position sensor on the fox Mustang’s EEC IV can throw a few codes, namely: 31, 32, 33, 34 and 35.

The EVP is located on the EGR valve itself which is on the throttle body spacer facing the firewall. First, make sure you have signal, check for voltage (around 5v) at the supply (VREF) with the ignition on, engine not running. If no power, then something is wrong with either the computer or the wiring leading up to the sensor. To test the sensor, the voltage reading should be (0.25v ~ 0.67v) between the terminals EVP and signal return.

The HEGO sensors are used in closed-loop operation of the EEC computer. When the 5.0 is running lean, the exhaust gas will have more oxygen so the O2 sensor will generate less voltage. If the engine is running rich, it will have less oxygen and the O2 sensor will produce a higher voltage. As the sensors age, the voltage range drops and the voltage change lags behind the changes happening in the exhaust gas/oxygen. You can test the sensors on the computer. Use pin 29 (left O2) or pin 43 (right O2) and the ground next to the computer ground. The individual O2 sensor should read between 0.20 to 0.90v at idle. The computer will throw codes 41 and/or 91 for possible O2 sensor failures. You typically want to change these sensors every 60,000 miles. Also, make sure that the thermactor cross-over tube isn’t blocked at the heads on one side, the excess fresh air can really throw an O2 sensor off.

This sensor, located on the lower intake manifold (driver side), 5th intake runner. All it does is tell the computer what the air temperature is to help it determine the air density, it will provide extra spark advance if the air temp is cold enough. These sensors don’t fail very often, most causes could be damage from backfiring, age and oil/carbon build-up. This sensor would produce code 64 in the event the computer finds a failure. You can clean the thermocouple (bulb thing inside the “cage”) with throttle body cleaner and a Q-tip.

The ECT sensor tells the computer if the engine is essentially cold, warm or hot. To ensure the sensor is getting the proper voltage from the EEC make sure the signal wire is getting 5 volts. A faulty ECT can throw code 21 which means reading temps less than 50 or more than 250 (engine off) and less than 180 or more than 250 (engine running). The ECT sensor is located on the coolant crossover tube and is a pretty easy/cheap sensor to replace albeit it rarely fails. An ECT failure can force the computer to throw code 21 or 51.

Speed Density cars (86-88) uses a manifold absolute sensor. It also uses the barometric air pressure reading at key-on (since the intake manifold will have the same pressure as the atmosphere) to be used by the EEC later. The MAP sensor is actually digital so at idle it will send a frequency at around 92Hz and at WOT it would be at around 159Hz. Its input affects air/fuel ratios, EGR flow, and ignition timing. This sensor will force a code 22 if it fails.

When Ford went to MAF on the 89 fox Mustang (88 in California), they replaced the MAP function with measuring barometric air pressure. The full-time BAP sensors had a small collar attached to the atmospheric vent. The BAP will affect air/fuel ratios and EGR flow. This sensor will force a code 22 if it fails.

This sensor is located at the business end of your speedo cable at the transmission. Keep in mind on Speed Density with no cruise control option will NOT have this sensor (which is why you have to install one for a MAF conversion). Other than the cruise control, these signals are used by MAF equipped computers to help idle down. The EEC uses 6mph as a value threshold to activate idle dashpot strategy and prevent engine stalls coming to a stop and tip in when shifting. This is why some people reported headaches with MAF conversions without the VSS signal. The dark green/white wire goes to pin 3 (VSS+) and the orange/yellow wire goes to pin 6 (VSS-) on the computer.

The IAC is blamed and cursed for every idle problem there ever was on a fox Mustang. Ford’s EEC controls engine idle with the help of the IAC (Idle Air Controller), also known as the IAB (Idle Air Bypass), BPA (Bypass Air Valve) or the ISC (Idle Speed Controller). The IAC is a solenoid that allows air to be bypassed around the throttle plate through a bypass channel. EEC controlled idle rpm can be variable depending on engine temperature, AC running, alternator load, etc…

Codes could be 58, 38, 19, 17, 13, 12 for the IAC. Before testing for codes, make sure your base idle is set properly. For that, first, start by unplugging the IAC, run the car on idle and adjust the set screw until you’re happy with the idle (factory is around 750-800RPM), turn off the engine, unplug the positive terminal on your battery for 10 minutes. Plug the IAC and battery back and start it up again and let run for a few minutes. You may need to re-calibrate the TPS to ensure it’s in range and that the computer will know if you hit WOT or not.

The IAC uses battery voltage (not 5v sensor voltage). To test the circuit, use your Volt-Ohm-Milliammeter and ensure you have at least 10.5v at the connector. To test the IAC, use your Volt-Ohm-Milliammeter to test the resistance on the two spades on the IAC controller. It should read between 7 and 13 ohms. You can clean the IAC by removing the controller and cleaning the valve itself with throttle body cleaner.

There aren’t many relays on the fox Mustang’s EEC-IV EFI system. When you turn your key on, you should hear that sweet sound of fuel being pumped into the system. If not, you could have a problem with the pump, relay or fuses. The fuel pump relay is under your driver seat unless you have a 92/93, that relay is under the MAF meter in the engine bay. Before going further make sure to check the inertia switch in the trunk area. With the key-on, you can jump terminal #6 on the EEC test connector to a ground and it should power the fuel pump. There’s a WAC (Wide Open Throttle – AC – Cutoff) relay on the passenger side fender apron and an EEC power relay behind the passenger side dash.

These are located on the passenger side strut tower (facing the rear). Two solenoids that when the computer sends the signal, they will open vacuum to either the thermactor bypass or diverter. The larger solenoid on top is the EVR, it sends vacuum to the EGR. The computer uses the O2 sensors to test the function of the thermactor system and will throw a code if there’s no change in O2 sensor readings. They can create codes 44, 45, 46, 94, 95 and 96. Keep in mind that you can only buy the newer style solenoids (88-93) so if you have an older fox, you will need a new bracket and modify your harness with the newer style connectors. Make sure the vacuum lines are not cracked or broken. You can apply power to the solenoids and test their function, they are basic “on/off” switches for vacuum.

You can read in more detail about the SMOG components of the Fox Mustang EFI system. 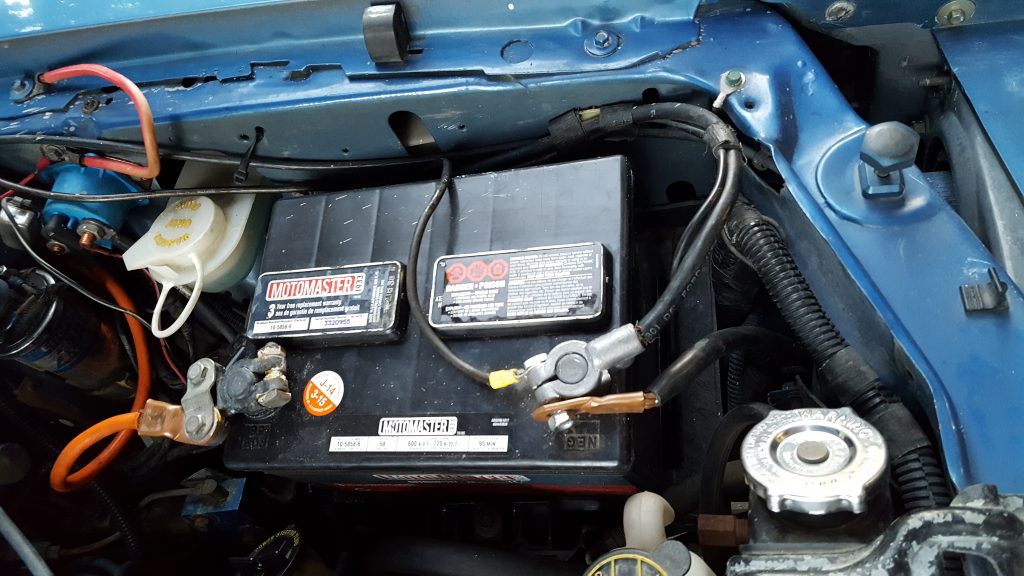 Ground Issues on a Fox Mustang?