It’s up to you to decide if you like this modification or not. I always wanted to try it and since it’s pretty much reversible – why not. In theory a spoiler up front will help create low pressure under the car when combined with low ride height and ground effects to help seal the pressure.  But the Mach1 chin spoiler is for looks and I doubt it will have any real affect on your fox’s aerodynamics. I also think it won’t cause the car to overheat as it would when you remove the factory air dam.  You won’t need a ton of tools, just a bunch of vice-grips (long nose would be best), a drill, masking tape, saw or even some shears. Keep in mind that using a jack for an oil change (if you go from the front to access the k-member) will be a huge PITA now with that chin spoiler in place.

You could use an OEM air dam from a 83-88 Ford Ranger (E3TZ-10001A06-B). With some trimming and modifying, it can fit your fox but will dramatically lower the ride height, more than the Mach1 lip but will be more functional and does not install flush on the bumper cover. Details on BrazeauRacing.com’s page.

I bought the spoiler at LMR.com, it’s the SVE brand I found it to be easy to work with, wasn’t frail and was flexible enough to make installation on the “wrong car” pretty easy, this job took me a little under an hour and this includes taking videos and pictures.

Make life easier by removing the front wheels, the spoiler extends well past the tires and you won’t be able to test fit. I didn’t do this, I just cut the spoiler until it fit and cut it again once it was bolted it. First thing is find center, there’s a little hole on the spoiler that seems to indicate center, align that with your bumper center and use some vice-grips to hold it in place.

Ready to Bolt It Up?

There’s some trial-and-error involved at the vice-grip stage, take your time to find the right placement. Below is a pic of the chin spoiler only held in place by a bunch of vice-grips, still not 100% correct? Go back and adjust it!

Once you are happy with the fitment and placement of the new Mach 1 spoiler, grab your drill and start making holes. Keep in mind I had no intention on using the plastic clip things that came with the kit, I used bolts instead. Warning: If using bolts, the lip will not break off if you hit something, instead it will take the entire bumper cover with it. Use at your own risk. I only used them thinking I was going to remove the lip for better comparison photos later in the season.

After securing the middle section, I trimmed off the excess spoiler on each side. I used masking take as a guide on where to cut the spoiler, it was flexible enough to cut it half-installed (for me anyway). Below is a pic of it bolted up, again I don’t suggest using bolts – I just wanted it to be easier to take off and on (not sure why as I write this).

It’s hard to visualize the effect since my fox is sitting on a lift but I like the look so far. I have about 4 3/4″ clearance at the lowest point of this spoiler (car has Eibach Sportline springs and tires are equal to 245/45R17 just a tad taller than stock). 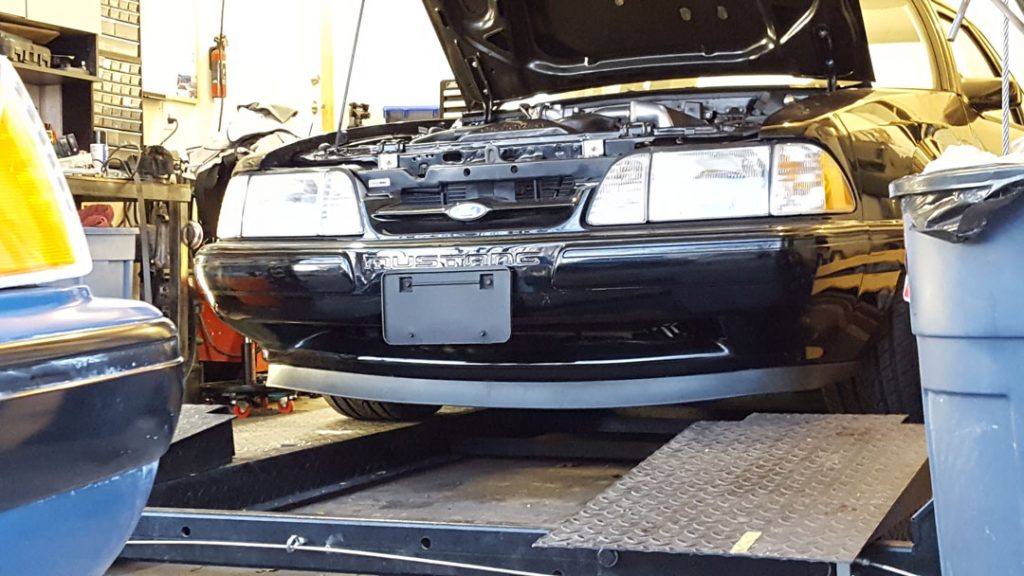 I’ll have some better pictures once the season starts to help you decide if you want this for your fox or not. I always liked them when I saw it. Again the mod is reversible, the extra holes on the bottom of your bumper cover won’t show.