With legislation requiring ethanol in fuel which really makes our exhaust stink more than it should (depends where you are some of you are lucky). Now combine the awful unburned fuel smell with vocal common folk complaining about hot rods and muscle cars ruining the environment and we’re essentially arming individuals to fight our hobby.

What are Catalytic Converters?

Catalytic converters were pretty much adopted in the early 70’s. The catalyst is a mix of precious and expensive materials (don’t throw old cats out, they’re worth something). Made from things like platinum, palladium and rhodium, the 4 cats you have on the stock H-pipe help to reduce that awful rotten smell from the exhaust. 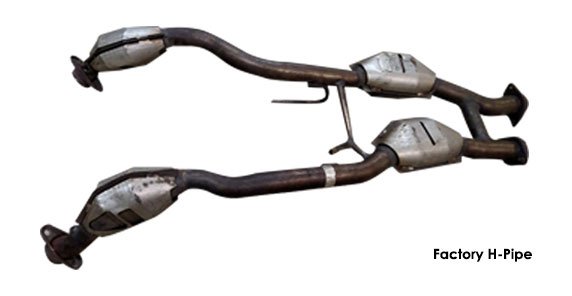 The first set of catalytic converters uses platinum and rhodium to help reduce the NOx emissions. When an NO or NO2 molecule contacts the catalyst, the catalyst removes the nitrogen atom out of the molecule and holds on to it, freeing the oxygen in the form of O2. The nitrogen atoms bond with other nitrogen atoms that are also stuck to the catalyst, forming N2. The 2nd stage of the catalytic converter is the oxidation catalyst. It reduces the unburned hydrocarbons and carbon monoxide by burning (oxidizing) them over a platinum and palladium catalyst. This catalyst aids the reaction of the CO and hydrocarbons with the remaining oxygen in the exhaust gas.

Some say removing SMOG and cats saves up to 15HP or more. The problem here is this is completely false (to a point). Of course, the factory H-pipe is restrictive and the newest is 25 years old… 25 years is a lot to expect from catalytic converters. If you replace your clogged up and restrictive stock H-pipe with a new 2.5″ off-road H-pipe (and chances are you are doing more than an H-pipe switch too), you will definitely feel a difference in power. But not so much if you switch from a new 2.5″ H-pipe with new cats (two, not four). At best you save around 5HP, especially on mostly stock 5.0’s.

You could but you still have a restrictive 2 1/4″ H-pipe on your hands. Also used up catalytic converters are worth money to recycling yards. Just cut them off and get some money back to put towards a new H-pipe (with 2 cats)! One ounce of platinum is over $1000USD at the time of writing this!

An off-road H or X pipe can be as low as $150 brand new and 2.5″ universal converters can be as low as $35 each (on RockAuto.com) which you could have welded onto an off-road H-pipe for fairly cheap. Compared to $313 Direct-Fit Catalytic H-Pipe or even $450 for the BBK brand (LMR.com). 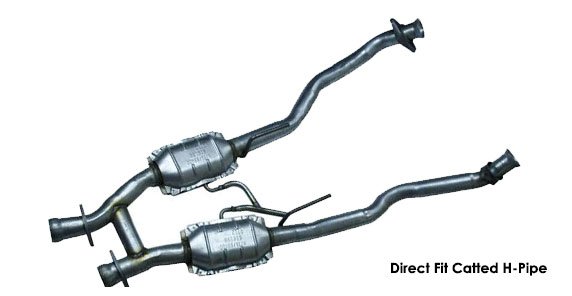 Top of the line would be the Magnaflow Catted X-ipe (FOUR cats) at around $1000. Which BTW, I had on my supercharged 86GT and it still produced near 400RWHP and had less exhaust smell than most new cars. 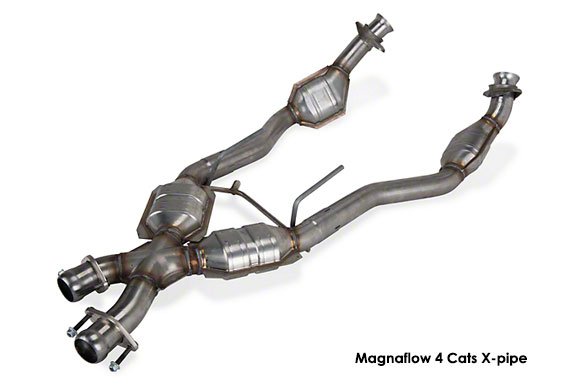 Do they Need Air?

The Thermactor Air System helps the entire SMOG system by further burning unspent fuel that would normally have to be processed through the catalytic converters. It helps with the lifespan of the converters because without the fresh air coming in, the excess hydrocarbons the converters can’t oxidize eventually clogs the honeycomb passageways. Honestly, the smog pump does not rob any power from your Fox, it actually dumps air to atmosphere when at WOT anyway. More about the SMOG stuff here >

Newer catalytic converters do not use air pumps because they’re designed to work with an improved computer system that runs the engine leaner and cleaner. Which is not the case with the old EECIV Foxbody Mustangs.

The factory setup with the convoluted 4 catalytic converters only exist in that form due to technology. They didn’t use a 3-way cat back then. Today you can use half the cats and pollute less. Basically it contains both the reduction catalyst and the oxidation catalyst. Newer, more powerful, Mustangs only have 2 cats from factory.

Not according to Title II of the EPA Clean Air Act (Enacted Jan 1st, 1988) there are multiple regulations concerning the use or misuse of aftermarket catalytic converters, or the removal and/or modification of stock catalytic converters. According to various parts of Section 203, all aftermarket catalytic converters must be EPA certified, and your car must have a gas conversion device of some manner. If not, both you and the installer are punishable of a Federal Offense by Section 205 (a). The operator’s fine can be no more than $2,500 and the installation agency no more than $25,000.

With anything, everything is “legal” until you get caught. Most states don’t have emissions testing but cats are so obvious that any person can tell if you removed and even gutted them (just need a temperature probe to find out). Honestly, it’s not worth the hassle!

There’s no real need to remove the catalytic converters from your street driven Foxbody. The potential costs exceed the benefit (if any) and, let’s face it, our hobby is constantly under attack – let’s not give them ammunition to challenge our hobby. The only real smell that comes from my personal Fox is the smell of tires evaporating. 🙂

What is the Right Gear for my Fox Body Mustang?