It’s no secret that the 79-93 Mustangs are pretty lightweight and we all know that lighter is better but here’s a more in-depth article about the fox mustang’s weight.

So the lightest fox Mustang is a 1979 coupe at 2,550 pounds or 2,870 with a 5.0L V8 and heaviest is, as you probably already know, a GT convertible with automatic weighing in at 3,442 pounds. The earlier foxes (and I mean the first ones) had lighter K-members and other little tidbits that help make it one of the lightest Mustangs. The AOD accounts for an additional 60 pounds over the T5.

The weight distribution on foxes are generally between 56 and 59% here’s a typical chart for how much the Fox Body Mustang weighs.

The most aerodynamic fox body is a base LX hatchback with a DC of .36 compared to a notchback’s .40 A GT hatchback is around .37.5. The first fox body notchback had a drag coefficient of .46! Comparatively speaking an early 80’s thunderbird had .35. The 80’s Camaro could easily slip through the air at .35 DC. You can improve the drag coefficient by lowering the car, making sure you’re not hanging the exhaust too low and keeping your tire width reasonable (what’s that?).

Ultimately you want to remove some weight upfront, “quickest” way to do that is aluminum heads, fiberglass hood, and tubular K-member / control arms. Moving the battery to the back helps shift over 30 pounds (but also adds weight due to the extra-long cable you need). Or you could spend $600 on a 15 pound 12V Lithium-Ion Powerpack Battery. You could also remove all the sound deadening (put some dry ice all over it, should crack and come off easily), and thick insulation blankets for about 20 pounds overall.

Below is a table of possible weight savings for some of the most popular things to do:

The weight (or lack thereof) of the fox body Mustangs is part of the reason of its popularity, if you start with a lightweight notchback at just over 3000 pounds and start doing a weight saving project, you could end up with a pretty light platform to play with. Just remember to keep it safe. I’m not one to recommend cutting up door reinforcements and other things to make a streetcar that much more unsafe. Please share your own weight saving ideas in the comments below.

Next article What is a Fox Body Mustang Worth?

The Climate AND the Hobby? 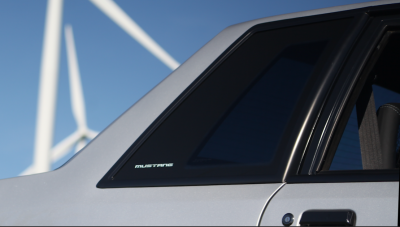