The fox is pretty simple. There’s no magic, just some sheet metal, some thicker sheet metal parts they pass for as a “frame”, fuel lines, brake line, etc… But there’s NO real good information out there, restoring a fox is MUCH more challenging than a 60’s classic because you can practically get the fingerprints of the dude who bolted in the gas tank on a 1965 Mustang! I hope these borrowed images collected over some time will help out. 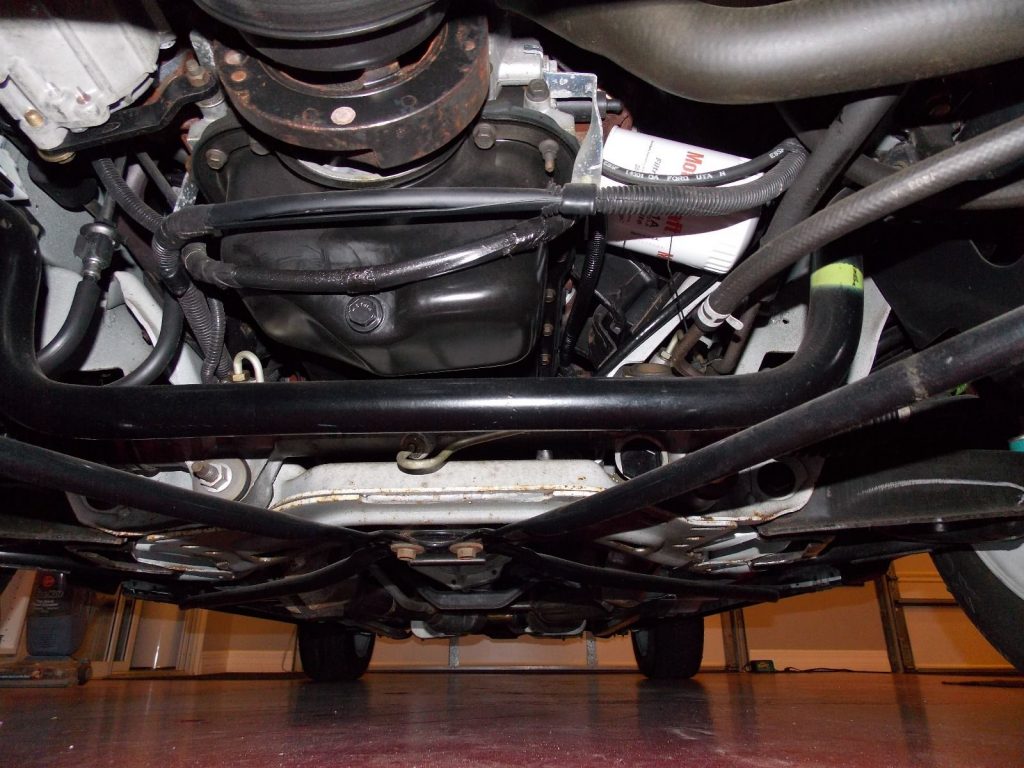 The pic above is from a 90’s convertible. Bottom is a 93 Cobra R! The unpainted part on the frame rail was probably how the car was supported on the production line? 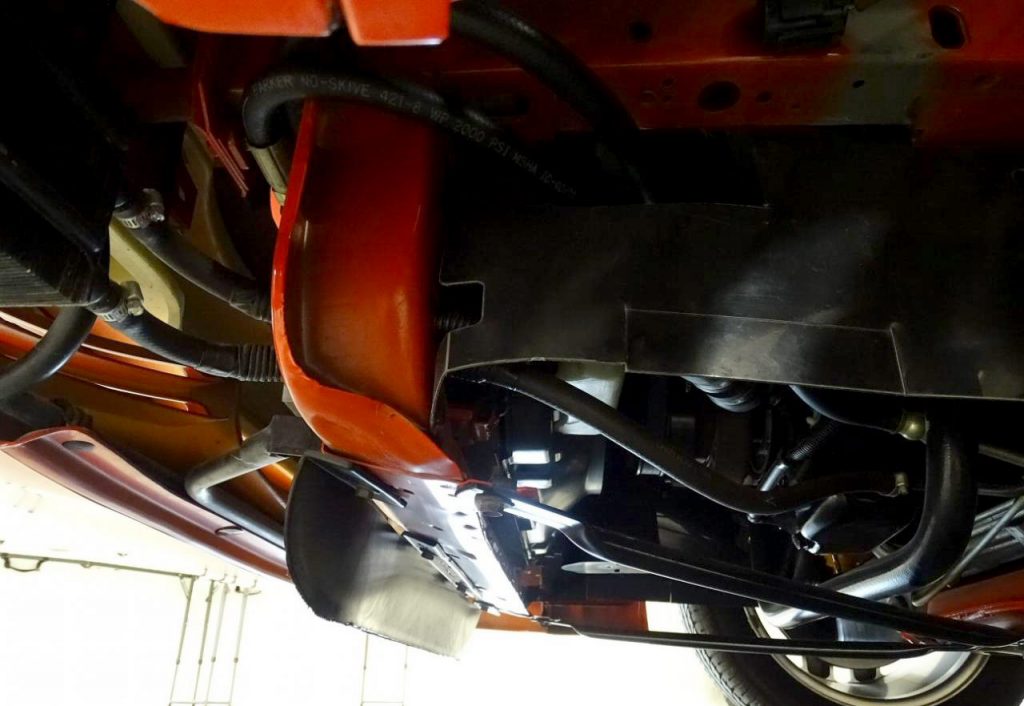 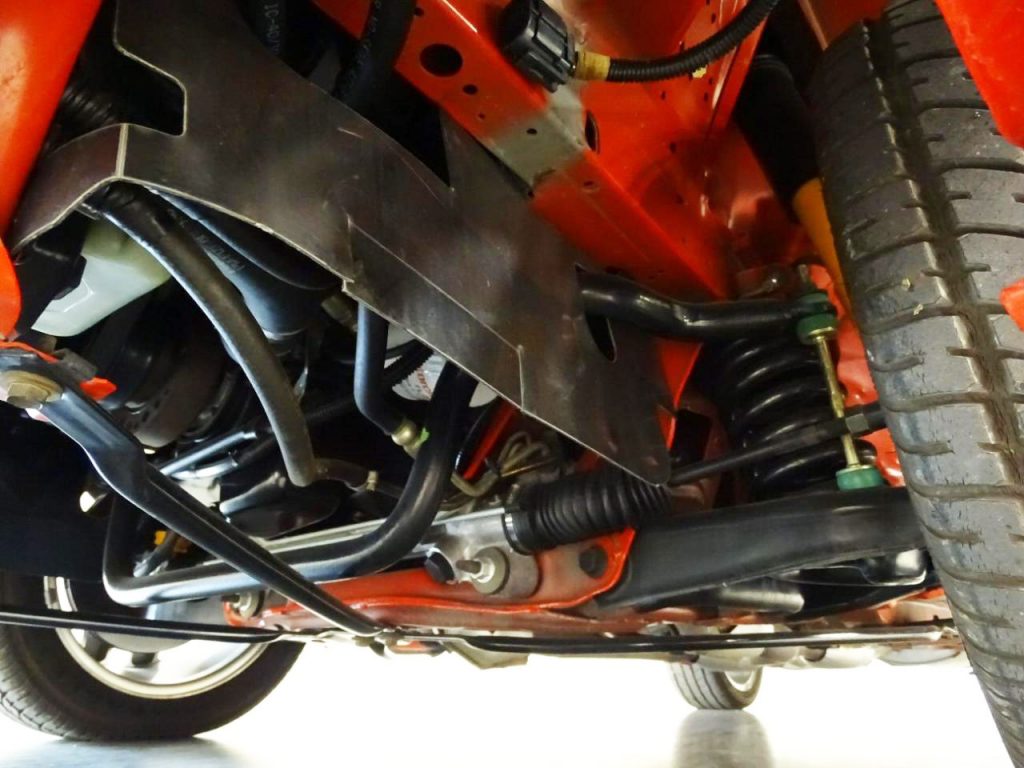 The K-member is body colour, a light dusting of colour in most cases. Control arms and sway bar are black! Notice the greenish marking on the sway bar from the above picture (not sure what years this was for though).

Above is a picture of a 93 Cobra R, it gives you more insights on how the K-member was painted from factory as well as the fuel and brake lines. 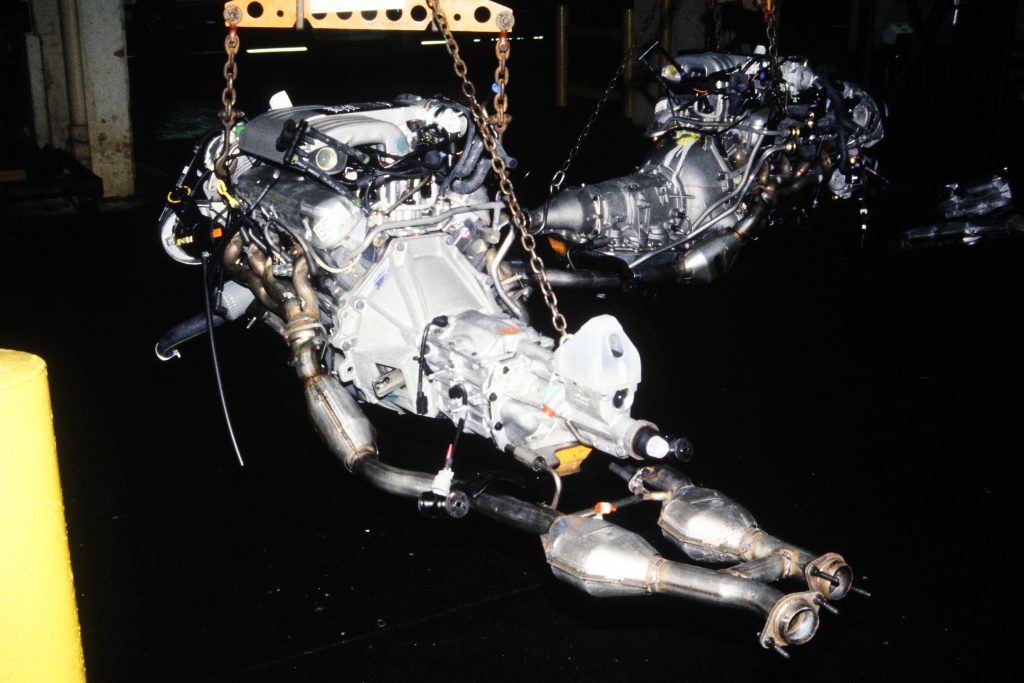 On factory original fox Mustangs you will see overspray on the bolts and the K-member wouldn’t be body colour if it done the other way. So when painting your K-member, make sure to have it grey first then sprayed body colour and not to cover it completely. You can see the colour coating is “faded” in hard to reach areas.

Early fox Mustangs engines were painted grey, including the oil pan as you can see in the below pic of a series of the 1986 302’s. (sweet eh!)

The engines were painted from the bottom up, meaning the grey will be strongest on the oil pan and oversprayed up to the heads (This is starting in 1982). The timing cover wasn’t completely painted. I think they did this to protect the oil pan only, paint on other stuff was just a bonus. I believe in 1993, Ford left the block as cast and installed black oil pans. 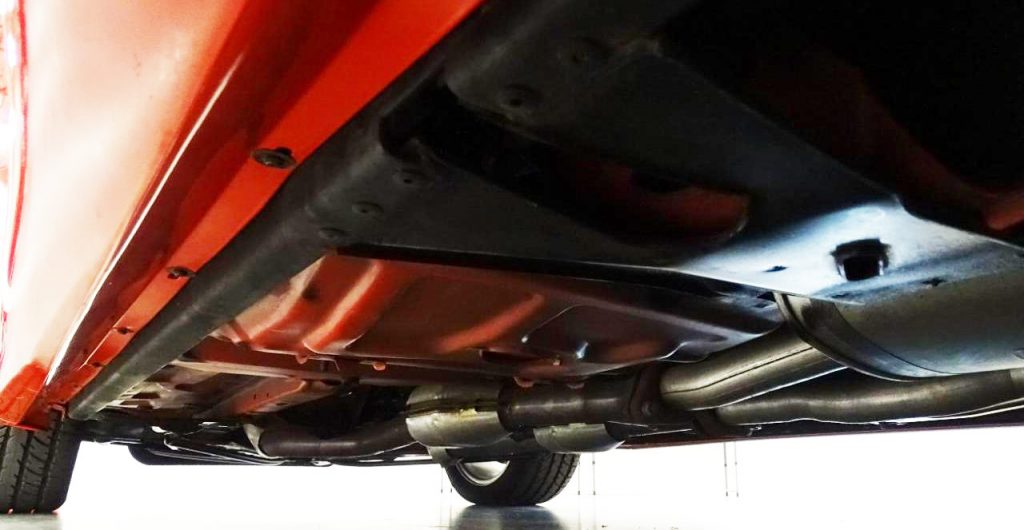 Above pic of a 1993 Cobra R (The black bracing can be found on convertible foxes). Below are some pictures of more un-restored but clean fox Mustangs. 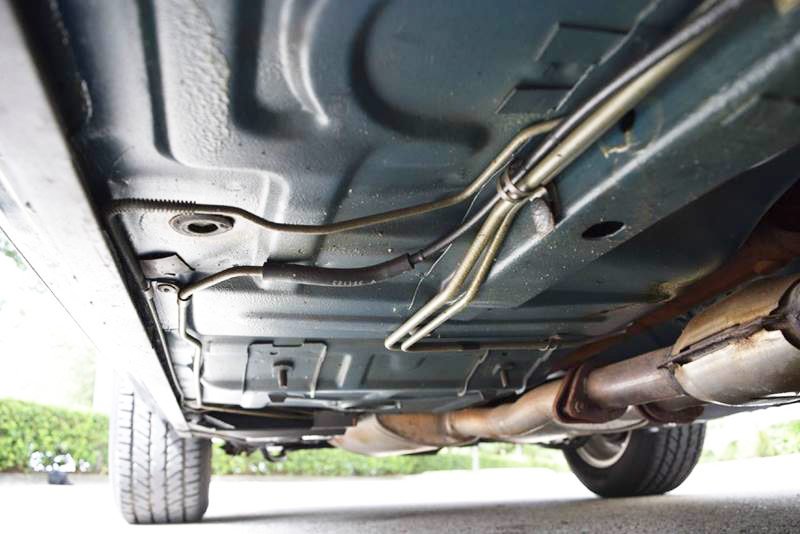 On models that came with gravel guard (I think cars sold in areas like Northern USA and Canada?) has some gravel guard overspray on the floor pans, leading up to about half way (near the rails).

Ford had a factory yellow marking on the diff weight as well. The bolts holding that were yellow zinc coated. 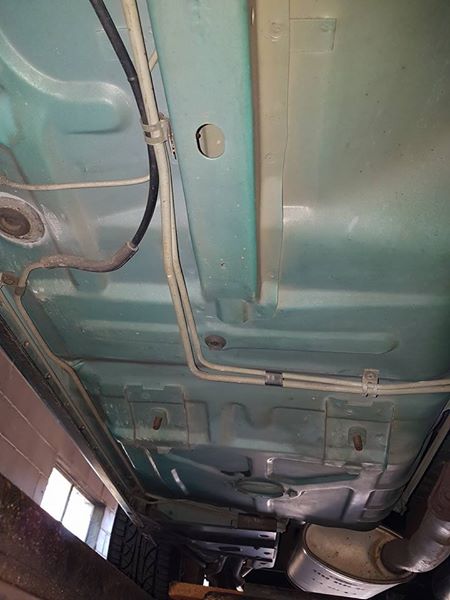 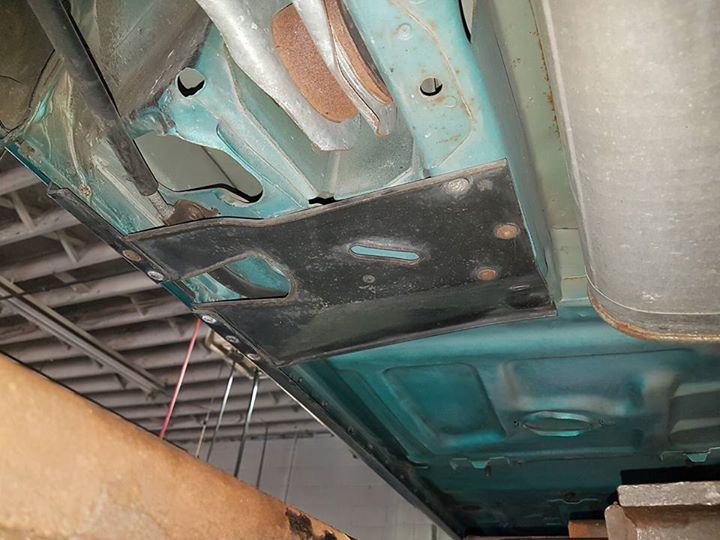 The fox shell was E-coated in battleship grey, oven dried, got sound deadening and seam sealant and then sent to paint. The under side was dusted with colour as the body was painted inside and out. On most super-ridiculously clean foxes I’ve seen all have this pattern of a dusting of body colour. I uploaded as many pictures as I cold that displays this.

To restore it, you’d have to make sure the battleship grey is applied evenly (I’d argue that it was at least semi-gloss from factory) and spray paint the colour coat in such angles that make it look like it was just overspray coming in from the engine bay and sides of the car.

The differential and exhaust where laid on the line and the chassis dropped on top is how the factory did it. 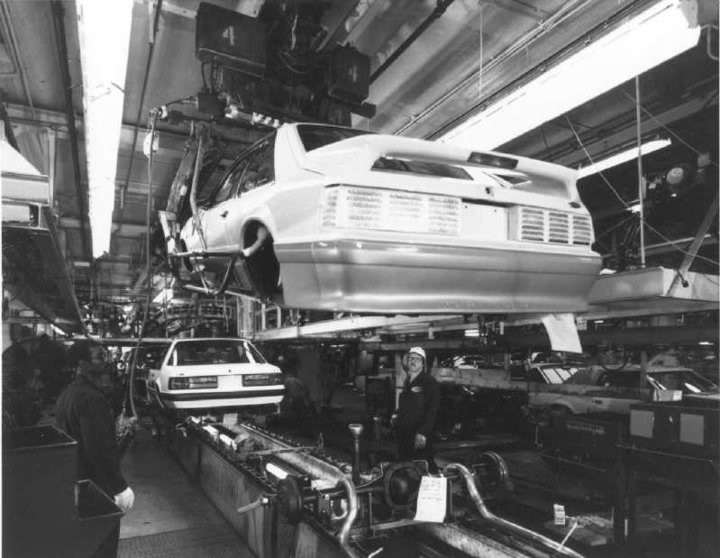 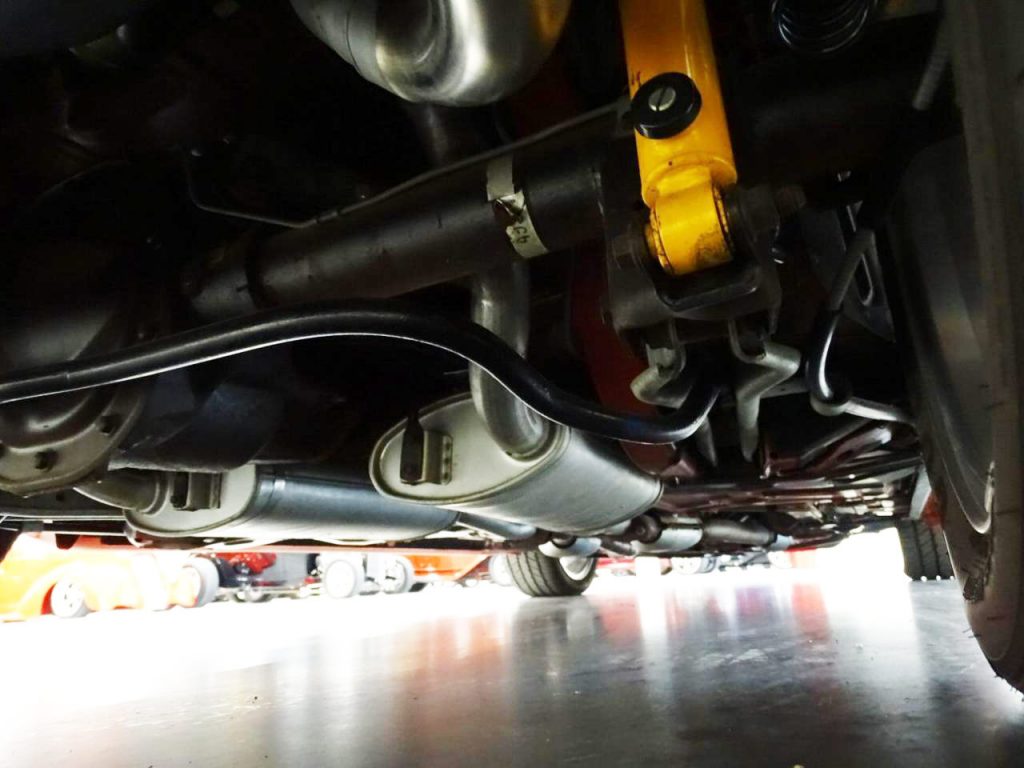 Above pic of the 93 Cobra R. Notice the blue marking on the sway bar as well as the silver label on the diff housing. It also looks like the diff was actually painted a satin black, maybe a thin cheap coat so it won’t turn orange from rust on the dealership lots LOL.

I’m not sure of the label that’s on the diff casing, could never make out the numbers on any of my pics except for a (I think) 98+ 8.8, I did find the part number for the casing on an 87 so I added that. The below is a sticker I’m making for my own project. It’s not accurate at all and I’ll update this if I do actually find the information to make a real one. That’s easy to change anyway feel free to download the fake label 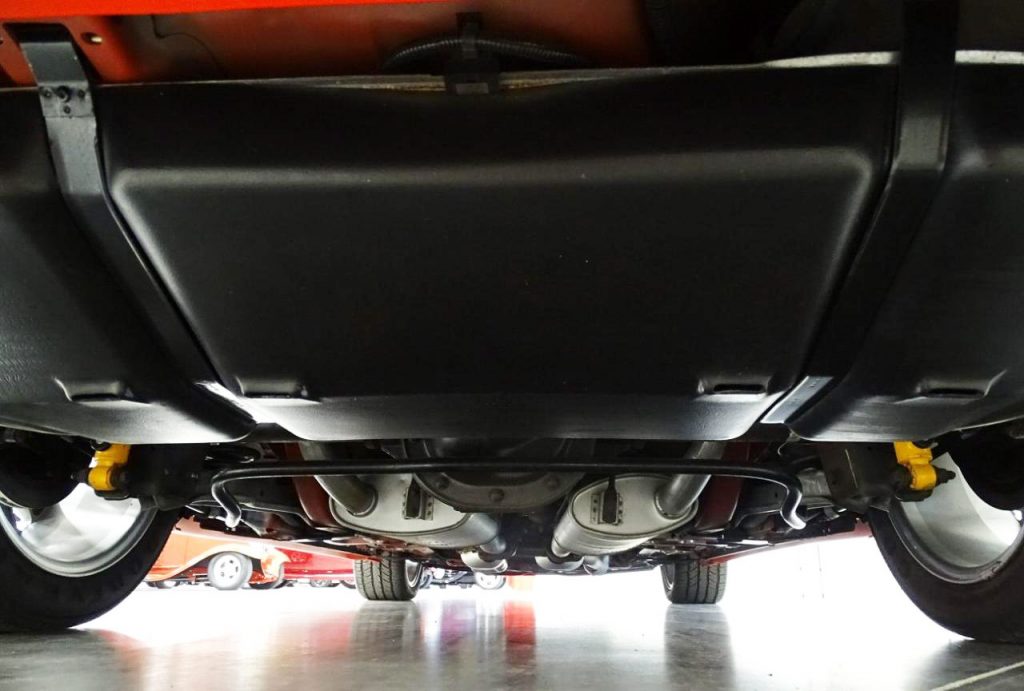 The gas tank straps were glossy black and you can see the diff cover in more detail here, it’s as if it was grey with a dusting of black paint over it.

As far as the driveshaft is concerned, I have no clue. I spent many hours searching online. All I can assume is, Ford installed it without paint, so it was most likely rusty by the time it reached the dealership. Below is a recent F150, bare metal shaft that’s already started to rust. So, in theory you’d be safe by painting it silver.

This is the closest I can find for a fox Mustang driveshaft (1989) I don’t see many signs of markings other than the red dabs. 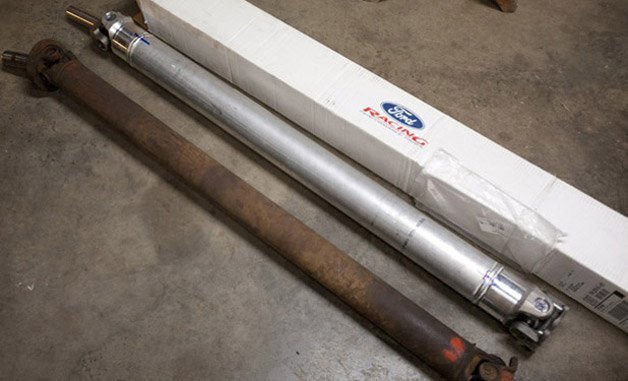 Below is a picture of a 94/95 driveshaft with markings still visible. I’ll update this as I would have to physically find a mint original fox, crawl under it and take some pictures. 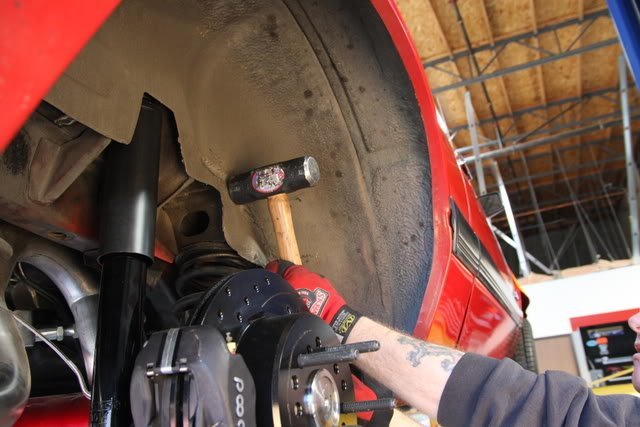 You can notice in the above picture that it was some sort of grey from factory that probably quickly became a yellowish colour.  Also notice the colour overspray over the the rear frame rails as well. (Ummm no need to hit it with a hammer, this is the best pic of a clean rear well I could find). Below is a picture of a restored front wheel well. 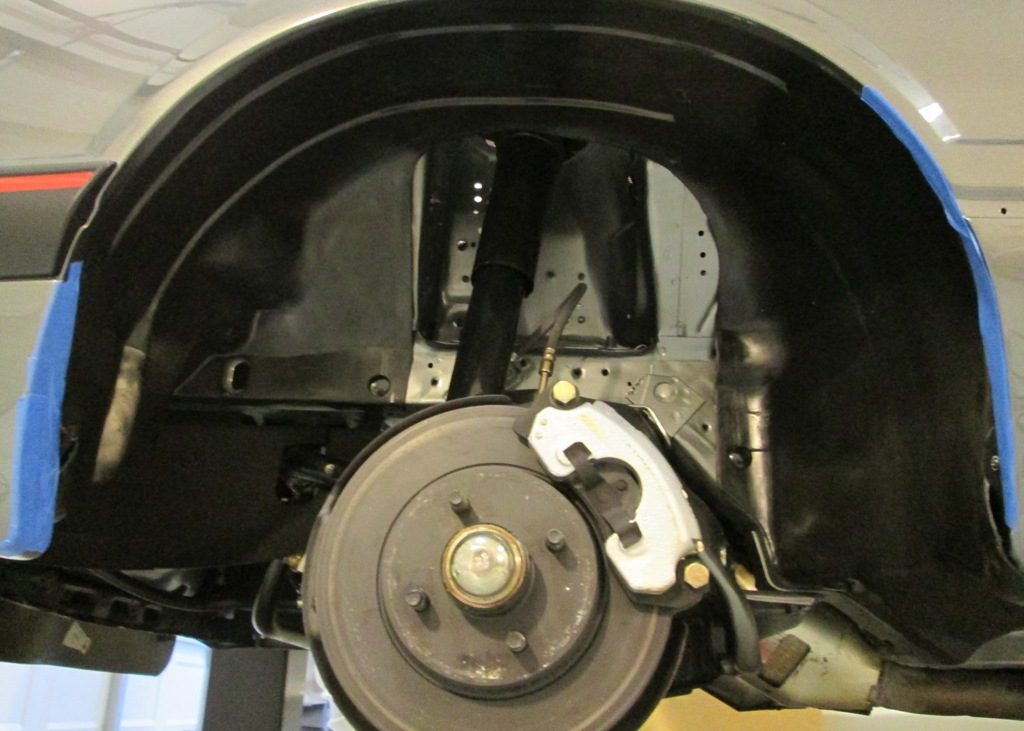 Basically if the underside is cleaned up and restored, it will be miles a head of many fox Mustangs out there. My notch had some yellow waxy undercoating that was almost impossible to clean up without a wire wheel, a drill, beer and lots of hours eating dirt, rust and grime. It’s not a fun or easy job to restore the chassis without really going full bore and gutting and supporting the car on a rotisserie for all this detail work. But it can be rewarding. 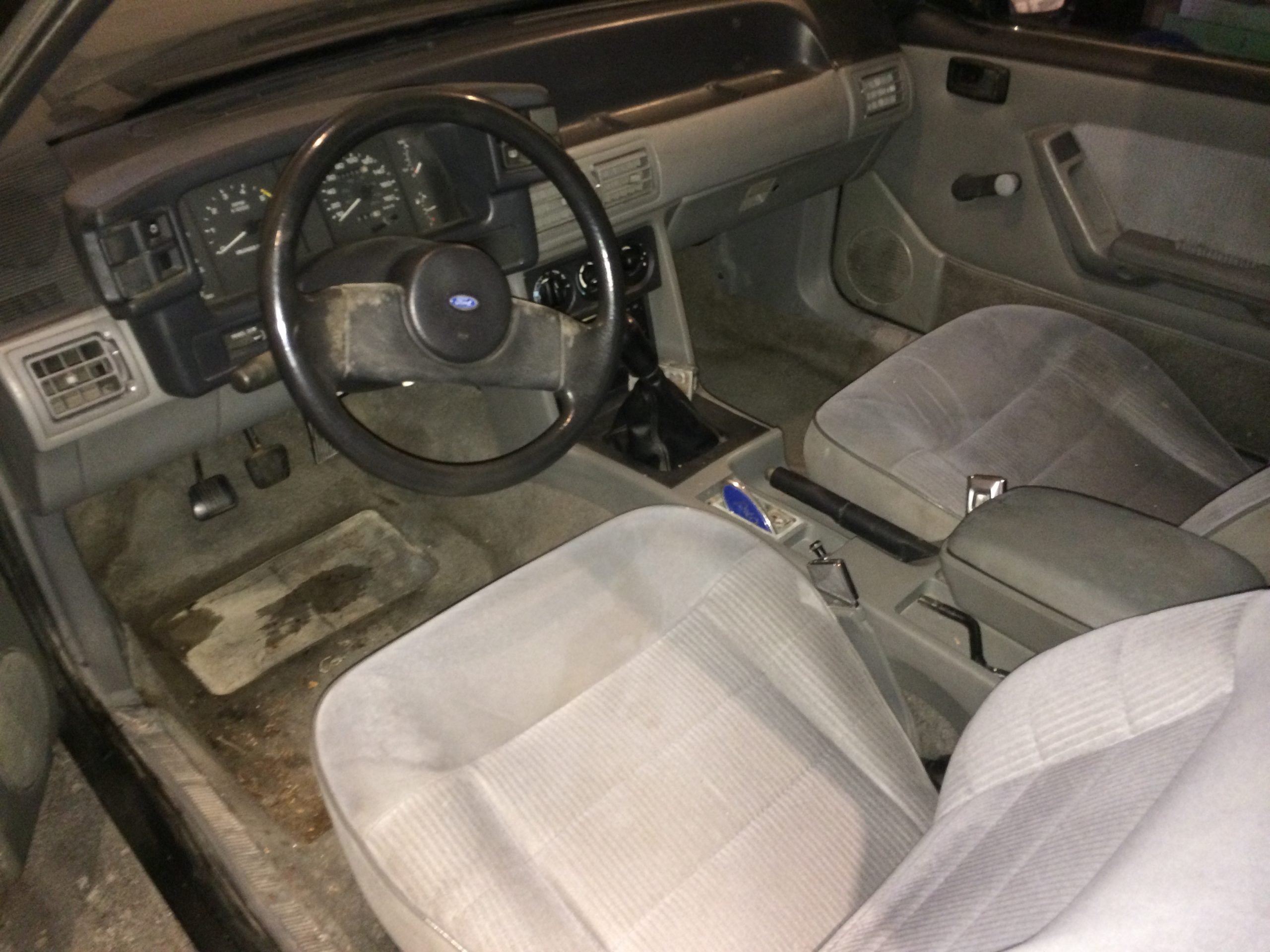 How to Restore a Fox Body Mustang Interior