One of the “must-have” modifications for your fox body Mustang is improving the charging system and replacing the factory alternator with a newer 3G that can help support electric fans, electric water pumps or things like sound systems…

Your Fox Mustang likely came from the factory with a 75amp 2G alternator and it’s wired (from the factory) in kind of a detrimental fashion. The power is carried to the battery starting with the 3 prong connector and those two “big” black/orange wires merge into one and is ran along with the radiator support. The 3G modification fixes this lack of 80’s engineering judgment (read: Kirchhoff’s law) with a larger battery cable (4GA recommended, 6GA minimum).

Things to gather for the 3G swap

Standard wiring for a 3G swap

Wires illustrated below are ran in the stock location, wrapped and protected with loom as well as tied into place. A good location to install the breaker or fuse is on the frame rail under the battery. If you have those years, you can re-use the factory D-connector since it has 3 wires in it. Removing the wiring tape you will discover the white/black wire follows the harness and loops back to the rectifying connector (black connector with two black/orange wires).

You no longer require the black/orange wires and you can remove that entire harness which follows the radiator support to the starter solenoid, that circuit is protected with a fusible link. Use a spade connector (or get a used proper connector from a 95 Mustang if being fancy) for the white stator wire.

The only new wire you need to run is the 4GA battery cable from the alternator to a fuse box (or circuit breaker) and to the starter solenoid.

What it looks like installed below. Note: you should use a boot to cover the battery cable on the alternator to prevent potential unforeseen sparks in the future.

Wiring a 3G into an 86 Mustang

Some models will only have 2 wires in the D-connector, missing the white “Stator” wire. Some 2G’s can be internally excited. You can get the connector at a salvage yard, alternator/starter repair shops or auto parts stores (Ford part is: WPT119) LMR also offers the 2G to 3G upgrade wiring kit. The factory harness looks like this:

You need to ditch all this and essentially connect the green and yellow wires to a new D-connector and use the new white (stator) wire to the Stator terminal in the 3G alternator.

If you have an early Fox Mustang, you will likely have a 65amp 1G alternator and an external voltage regulator. The easiest method is to use a kit which is essential “plug and play”. The instructions indicate to keep the existing power cable (black/orange), this is to power the factory amp gauge. It’s recommended to ensure that circuit is properly protected and functioning to help avoid the risk of fire.

An alternative method that also cleans up the wiring is to skip the wiring kits (like the PA or SVE kits). All you need to do is install the 4GA wire as you would normally do but you need to find a fused power source for the yellow wire and an ignition power source with a 440k 1/2 watt resistor. Below ignores the factory AMP gauge and gives you an excuse to get a new volt gauge.

As mentioned before, you will find that the “already inaccurate” factory AMP gauge on your 79-86 Fox Body won’t work anymore. It probably uses a shunt resistor in the black/orange charge wires so bypassing them (as you should) would prevent the AMP gauge from working.

The small case 6G from a 2001 V6 Mustang should fit your fox body as it has mounting bolts 180 degrees from each other. The 6G has better bearings and cooling and looks a little different than the de facto 3G upgrade. The smaller case on the 6G means you won’t need to trim the alternator bracket.

Wiring the 6G is about the same minus the white “stator” wire, which is now internal and no longer needed in the harness. You’ll need a new connector or used one from a salvage yard.

Next article How do I Store My Fox Body Mustang for the Winter? 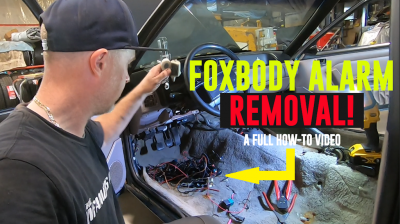