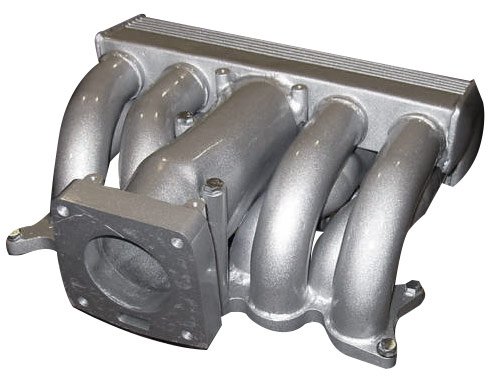 As our foxes get older and more collectible people are starting to look at what performance parts were available in the early days and this post talks about the “GT40” family of intakes. I believe it started in the mid/late ’80s with the tubular style intake manifold. First built in Japan (probably by Yamaha), the first years were hand made with formed end caps.

Notice how they were crafted originally and the mounting tabs for the cover plate as this varies more than you’d think. 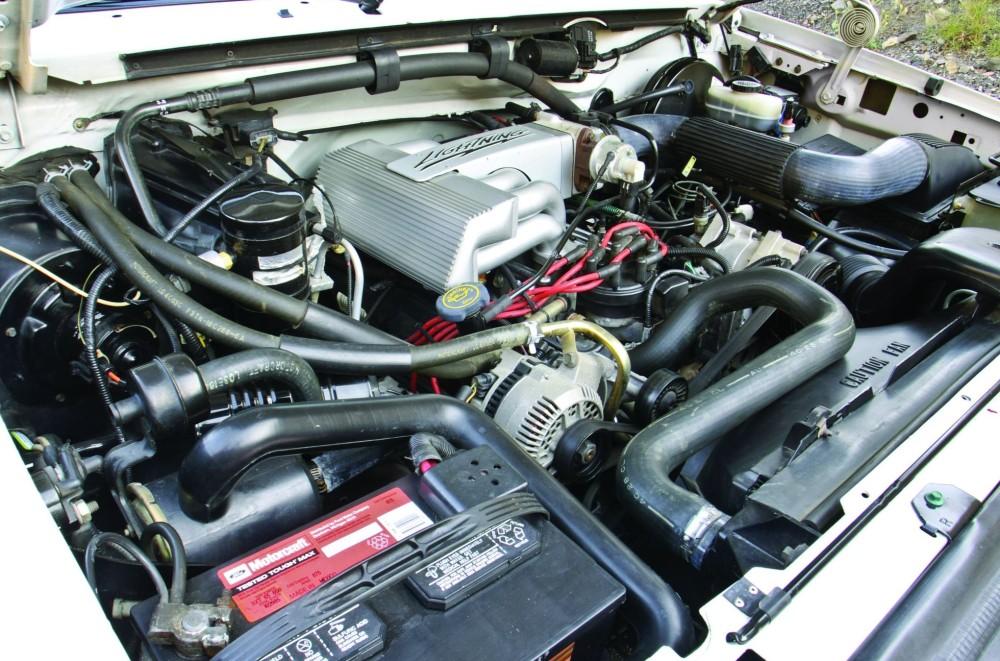 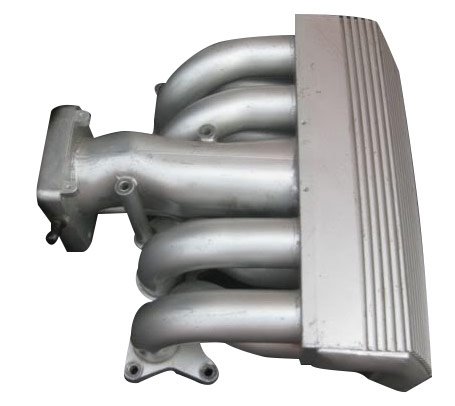 They also installed GT-40-type cast-iron cylinder heads, the tubular “tuned” manifold, tubular stainless-steel headers, larger intake (1.84-inch) and exhaust valves (1.54-inch), high-flow ports, high-rate capacity fuel pump, and injectors, revised combustion chambers, a redesigned air filter for improved airflow and a true dual exhaust system. All this produced  240hp at 4,200 rpm and 340-lbs.ft. of torque at 3,200 rpm which was pretty healthy back in the day, the heavy truck was also in the mid 15 second 1/4 mile range.

The intakes from this truck are probably the most common on the used market, you’ll notice it from the mounting locations of the screws for the cover plate and pretty smooth merging of the tubes and the primary. Also, note that the lower won’t fit your 302 since it was designed for the 351 but you can find the lower intake manifold pretty easily.

Another variance of this tubular style intake? Yup! This one is pretty much like the original but probably a bit smoother. The biggest headache for you possibly is the more-than-likely mismatch with that $400 USD ultra-rare cover plate. The mounting holes are on studs and not on the large plenum as you’d find with the Lightning version. 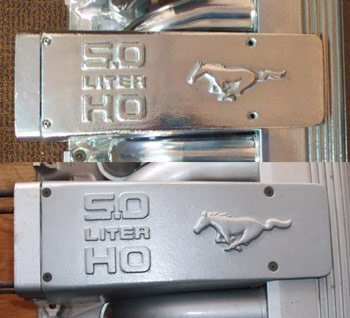 If you bought 250 of these in the ’90s, you’d have $100,000 in intake cover gold! Anyway, more rare than the intake itself are the cover plates. They were sold optionally from Ford Racing and most people said F-that and just got the manifold. So there are a lot more intakes than covers and that has been driving the prices up.

There are two models to watch out for. If you have a Lightning production intake, the cover plate for the FRPP manifold won’t fit and vice-versa. So be aware when buying it. The lightning version will have the mounting screw holes directly below the tail of the horse while the FRPP version will have the holes directly below the rear leg. The difference is subtle though.

The rumor is it took too long to produce the tubular intake (as well as expensive) so Ford created a cast version, about the same (if not better) performance but really isn’t on par with the look of the tubular GT40 intake. Featured on the 93 Cobra and Cobra R fox Mustangs 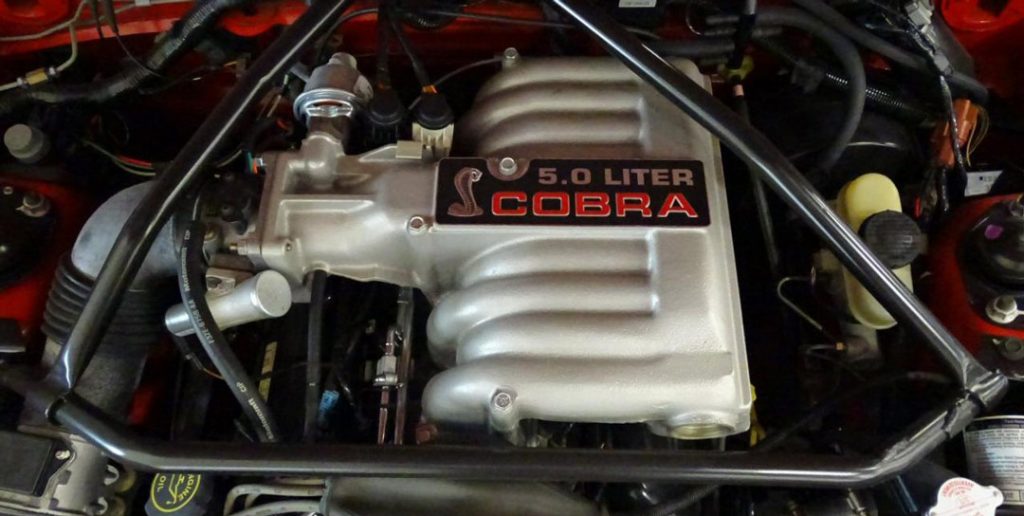 The part number for the real Cobra upper is RF-F3ZE-9425-CB and RF-F3ZE-9425-CA (CA was the first cast version, that didn’t have a reinforcement ridge, they added it due to some harmonic vibration or something, one with the ridge ends in CB). 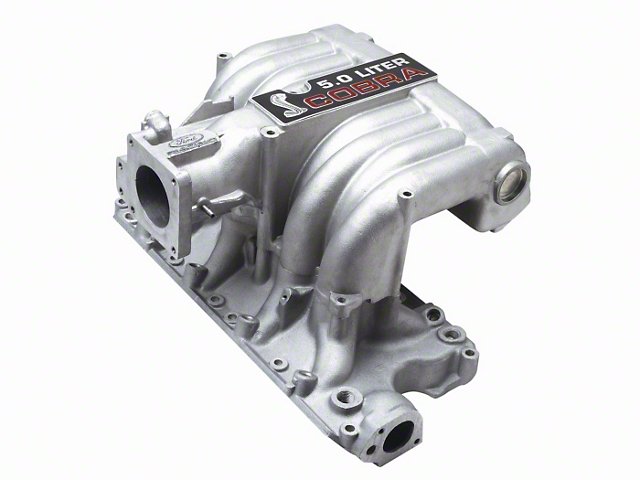 There’s also a fake out there, well not really a fake, but FRPP had a Cobra intake in their catalog for a few years and those were made in China. They’ll normally have a “Ford Racing” logo near the throttle body.

One thing to know about the Cobra upper manifolds is, it DOES NOT have any coolant lines, this intake has the EGR piece molded into it, which does not have water jackets. (The 93 Cobra’s did not use this either).

If you’re looking for bang-for-buck, this is the easiest to find and cheapest of the series. It apparently flows the best of the 3 designs, albeit a very small amount.

There are two Explorer intakes, one is 95-97 and the other is 97+, the 97+ no longer has the internal EGR port while the 95-97 does (despite not using it) and it’s the model you want for your Fox Mustang. You’ll have to drill through the boss at the back of the intake so that you can run the regular EGR setup. AND you’ll have to drill and tap the boss for the ACT sensor (3/8″ NPT) in the stock location. The 97+ ones, you won’t be able to run the standard EGR (not good if you have to pass emissions) and there’s no boss for the ACT sensor. Easier to find an early version. Check out the picture of a 97+ Explorer lower intake manifold provided. Probably more work than it’s worth to get it running in your fox. You can tell right away which version the upper is, the later ones had two surfaces, in the middle where the EGR was is a channel instead of one complete flat surface for all 8 ports, you get 4 on each side.

A direct swap, it has all the standard EGR and ACT provisions, no drilling or tapping. Very hard to find and desirable lower intake manifold. This would have an F3 (meaning 1993) in the part number.

This would have RF- F4ZE, it’s a desirable lower intake, more so than the Explorer (or FRPP) lower intake manifolds.

Sold as a kit from the performance catalog from 1998 to 2003, this is a modified Explorer lower intake to fit your fox. It would have the part number like RF-F87E-9K461-BA Which is a direct bolt-on for the Fox Mustang. There’s also a number RF-F2ZE-9K461-AA which is also a valid casting number. (Although I’m not sure if this is FRPP or not)

This intake will need some modifications, namely the ACT sensor and EGR passage. Part number would end in BB, something like RF-F87E-9K461-BB

For the price of a used Tubular intake and correct cover plate is over $1000USD now, you can get a much better aftermarket option for the money but the nostalgia of the rare “museum piece” is what people are going for with the tubular, not performance. Although some would argue that it’s lighter and keeps the charge cooler for forced applications. I’m on the “looks pretty” camp. With that said, it’s not a terrible mod. 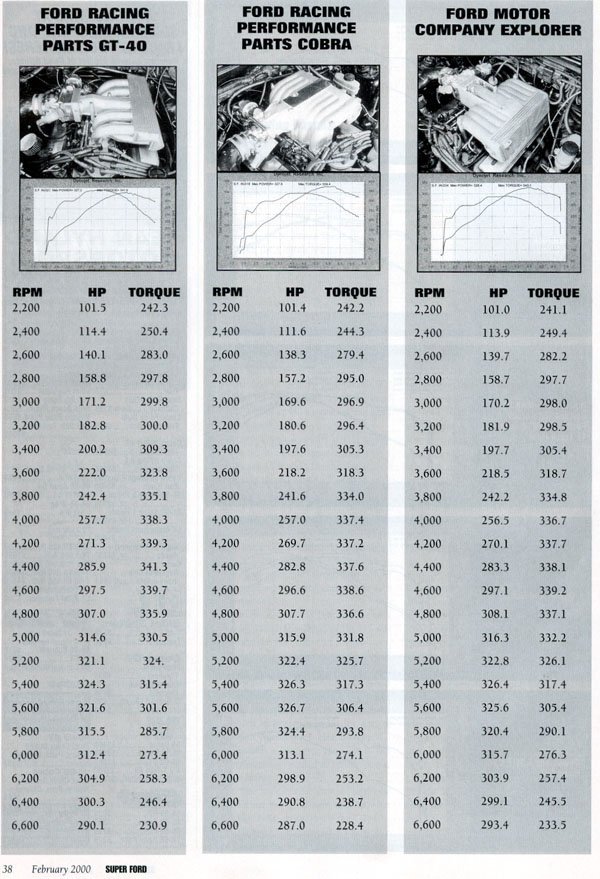 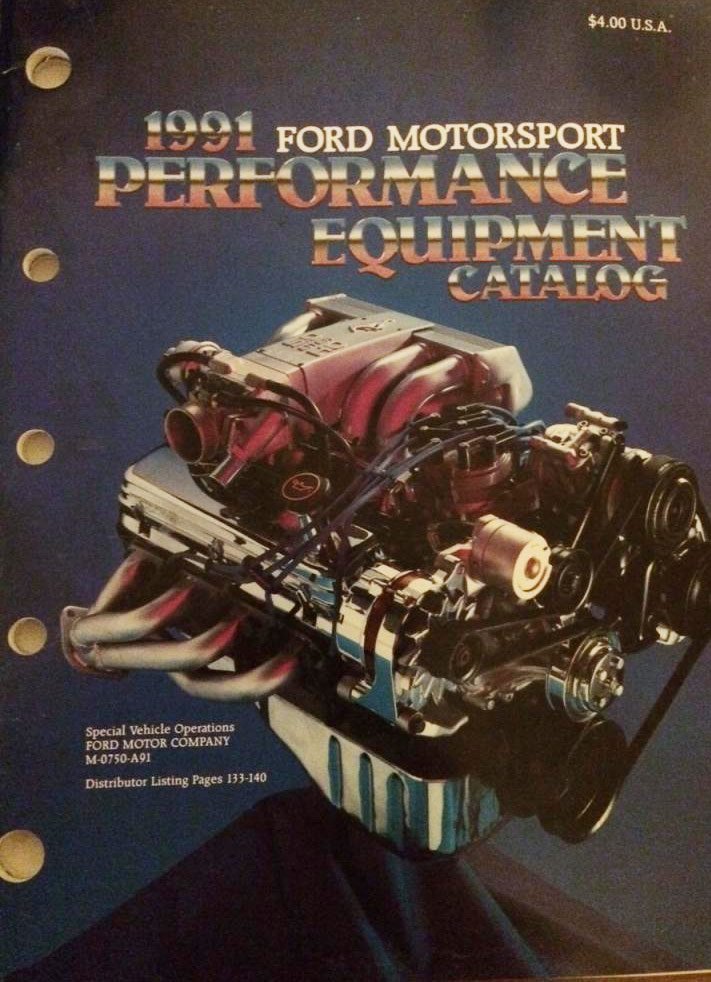 Next article Old Classic Graphics on the Foxbody Mustang

GT-40 Heads For Your Fox Mustang

What is the Right Gear for my Fox Body Mustang?